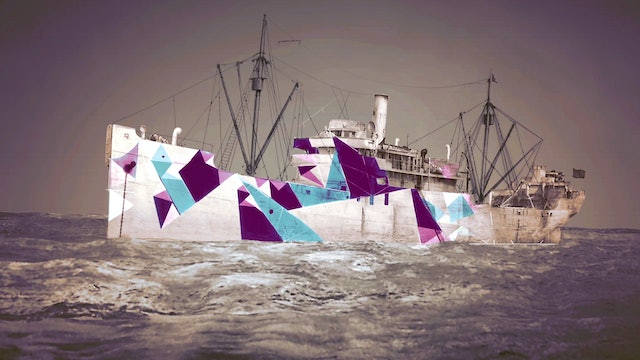 Artists and the military might seem strange bedfellows, but painters, sculptors, photographers and set designers have played a critical but little-known role in modern warfare. Despite resistance and often ridicule, artists were recruited in both the first and second world wars to devise ways to protect troops and deceive the enemy by using their artistic skills and intimate knowledge of perspective, illusion, shadow and movement. Inspired by nature and influenced by the modernist movements of their day, camoufleurs created bizarre decoys, dummy tanks and elaborate sets to conceal military installations. They painted thousands of ships in bold, arresting stripes and patterns to confuse enemy submarines. When war went hi-tech there was no room for artists, but over the past few decades they have reclaimed camouflage for their artwork. Now, the race is on for the ultimate in camouflage - invisibility!
Using rarely seen archive, interviews with leading experts and arresting visual graphics, this quirky and energetic 1 hour documentary reveals the untold story of the art of deception in war.
Produced by Jonnie & Kate Films
Deception by Design ©2015

Right-click this and copy the link address.

Watch on your Television

Watch on your Computer